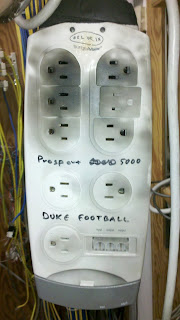 This particular power strip was the one that the score board controller at Wallace Wade Stadium was plugged into.  Pretty gnarly, huh?  The amazing thing about this is that the surge protector totally did its job.  The scoreboard controller was completely unscathed (Except for a bit of blackening from where the power strip was sitting on the controller).  A $1000.00 piece of equipment was saved simply because it was plugged into a $20.00 power strip.  Isn't that worth the hassle of buying and using a power strip?
Posted by Unknown at 9:44 AM No comments:

It's All in the Angles

I recently had an interesting conversation with a media minister for one of the large churches in the area.  He was telling me about his early days using media in worship settings and he told me that he had a significant amount of success using video in youth retreats in the 80s but he thought that might have been due to the way that they used camera angles to suggest certain ideas.  He said that this was probably unethical and that churches need to think carefully and theologically about how they use video and what they suggest with their angles.

This conversation really got me to thinking about how much churches should be pushing their agendas subconsciously through film and camera angles.  The question for me is, "what is appropriate use of film in a worship setting?"  This question is muddied by the generally artistic nature of film.  If film is the work of the artist, what are the ethical obligations that we should put on that film maker?  Is there a way to use film in worship neutrally, without pushing our agenda as a church?  Are there ways that pushing our agenda could hurt us more than it could help us in certain situations?
Posted by Unknown at 10:29 AM 1 comment:

Two of the Most Important Things I've Learned

When I first started doing technical theatre in high school, I ran the light board for the first show that came down the line.  As I was running the show, I had a fear pop into my head: "What if something happens and I can't fix it?"  As I stayed in theatre through the years, I learned a lot about lighting systems and I ran a lot more shows, but I still had an an increasingly more irrational fear, "What if I do something to mess up the show?"  Needless to say things just don't go wrong for no reason, but it is not uncommon to come across situations where something happens that you are not expecting.  There are two things that I have learned in my years of working that have really changed my perspective on running technology for events.

The first thing that I have learned is be prepared but if something goes wrong, don't worry about it.  There are times when things go wrong and sometimes there is nothing you can do about it.  This doesn't mean you shouldn't prepare and make sure that everything is working before hand, but if something happens and you can't fix it you just have to go with it because there is really nothing you can do.

The second thing that I learned is if you mess up, don't worry about it.  Lets be honest, everyone messes up sometimes.  Even the best technician will hit the go button too early or will bring a microphone up too late.  If every technician was devastated every time he or she made a mistake, then there wouldn't be any technicians left in the world.  In fact it is not uncommon for me to mess up at least once every time I run lights or sound for an event (and most of the time nobody notices).  If you focus so much on the mistakes that you make and not on the event at hand, you will likely make more mistakes.

How can we train new to not worry about making mistakes, while at the same time helping them to be confident in their ability to do the job?  What is that acceptable range between understandable mistakes and preventable disasters?
Posted by Unknown at 10:30 AM 1 comment:

Having worked in the theatre/live sound/AV field for a while now, there is one thing that I find a fair amount and yet it still often surprises me.  That is, how few people understand what is needed to take care of lighting/sound/AV.  It has often been my experience that I am working live sound or AV for an event and someone hands me a video or song or powerpoint that they want played in a half hour or less (I have even had someone come up to me after an event has started and asked me if I could play something after the next act!).  I think what people tend to not realize is how much work it takes to make the AV, sound, and lights look effortless.

Often, in the entertainment industry there is much frustration directed at a client when they ask for something at the last minute but I am not sure that is the way it should be.  Most people just don't understand that it is not ideal to hand a DVD or CD or thumb drive to the technician five minutes before the event starts.  It really takes some time to test everything and make sure it is working well before the event starts so that we can fix problems if there are any and work out kinks.

What do you think is the best way for technical people to share the amount of work that goes into even the simplest event?  What is a good starting point for dialogue between the general public and the technical staff?
Posted by Unknown at 9:27 AM No comments:

I am currently taking a class at Duke Divinity School entitled Film and the Christian Life.  In this class we are discussing a to think theologically about movies that are not inherently theological.  The class has been great so far, and I have a feeling that quite a few posts will come from the topics we discuss in this class.

For this week, we read a work called "The Work of Art in the Age of Mechanical Reproduction" by Walter Benjamin.  In this work, Benjamin talks about how the mass production of art diminishes what he calls its "aura."  In class we discussed this issue in the difference between painting and movies.  While trying to put our finger on exactly what Benjamin meant by "aura" we discussed the inaccessibility of the form of painting over and against the easily mass produced form of movies.  All of these points were valid, but I kept trying to figure out how this related to the dichotomy between live theatre and feature film.

Then it hit me, there is another layer of activity and depth in theatre that is not in movies.  We were discussing how movies just show a flat view of "the world as it is" without the true depth of life.  In other words movies are just a snapshot of real life.  While live theatre is not as "accurate" or "true to life" it is in some sense truer than film.  There is an additional layer of life in theatre that is cut out of film.  On some level there is always an actor playing a character onstage, this actor can come out when he or she drops a line or trips onstage.  this adds a whole layer of meaning to live theatre that is edited out of a film.  A character in a film is always the character and never the actor, because we only see what the director wants us to see.  In this way, film is a truer snapshot of life.  Perhaps it is important for me to note here that I am not commenting on the artistic value of film over and against theatre.  I am just trying to get at a fundamental difference between film and theatre.

Hello and welcome to my blog, Theological Design!  I have undertaken this blog as a way to explore a concept I refer to as Theological Design and to be able to chronicle my experiences.  I hope that this blog will be a starting point for conversations around this topic.

To find out about my current understanding of Theological Design check out my website: www.jdjumpdesign.com  I have composed a statement on Theological Design and I will continue to revise it as I explore this concept and experience work on the ground.

Once again, welcome!  I look forward to this journey trying to figure out what Theological Design truly means.  Thank you for joining me and I hope that together we can help make the church better with the topics we discuss.
Posted by Unknown at 9:51 PM No comments: